What is stevia and what are the benefits of this natural sweetener? 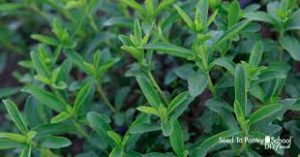 What is stevia and what are its benefits? To the native people of Paraguay, the Stevia Rebaudiana plant known as ‘kaa-he-e’ or sweet herb, was a staple in many medicines and teas. For hundreds of years, the people used its leaves as an antiseptic to help treat burns and as a digestive aid for colic and other stomach problems. They also used the leaves to enhance the flavor of a traditional bitter tea called Yerba Mate and the leaves were sometimes chewed for a sweet treat. This plant was recorded by a local botanist named Dr. Moises Santiago Bertoni, the director of the College of Agriculture in Asuncion, Paraguay. He noted that putting the smallest particle of the twig or leaf portion from this plant was potently sweet.  People realized the many advantages of the plant and its use spread around the world.

So just how sweet is it? Stevia extract was found to be two to three hundred times sweeter than sugar! It came as no surprise that the stevia plant would become wildly popular in the wide-world market. As far as digestion, the body metabolizes this natural sweetener differently than it does sugar (sucrose). Due to poor absorption in the digestive tract, stevia does not raise blood glucose or insulin levels. It contains zero calories, zero carbs and produces no glycemic response. Consequently, stevia leaf extract, high purity steviol glycosides, (be wary of some brands’ fillers, i.e., sugar alcohols, etc.) is considered safe for everyone to use, including pregnant women and children.

Sugar, on the other hand, is processed differently by the digestive system and is absorbed into the bloodstream.  This causes prolonged higher blood sugar, insulin resistance, and leptin resistance which can lead to weight gain.

This natural sweetner is a great sugar substitute and boasts many health benefits. Studies show it may help reduce cholesterol levels, lower high blood pressure, and help with weight control. It's allowed on most eating plans and diets, even restrictive ones such as the HCG Diet.  Stevia comes in different forms such as powders and liquid and can be used to cook and flavor beverages.

The next time you decide to make a hot tea, mix up a tart lemonade, or make a scrumptious dessert, grab the stevia instead of the sugar bowl. Not only will your beverage or food taste delightful, but your waistline will thank you. You can check out a variety of stevia products on our website including stevia powder in packets or flavored liquid stevia. Try Sweet Leaf Hazelnut or English Toffee liquid stevia drops in coffee and skip the creamer or fix yourself a delicious low-calorie lemonade with Lemon Drop stevia. The possibilities are endless, visit our online store and get yours today!