5 Reasons to Cook with Cinnamon This Holiday 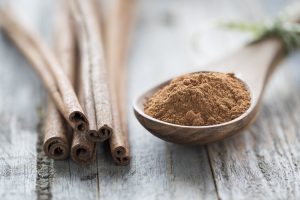 Cinnamon is a common ingredient used in dishes made year-round but even more so during the holiday season. There are not only "taste-wise" but "health-wise" reasons to cook with cinnamon. Since the days of ancient Egypt, cinnamon has been used as an flavorful ingredient and appreciated for its powerful medicinal properties. Whether you are making a dessert or using it to add flavor to your coffee or apple cider, cinnamon actually has a variety of health benefits.  Add cinnamon to your Thanksgiving and Christmas dishes, and you can enjoy the following perks.

Reasons to Cook with Cinnamon

Cinnamon is Packed with Antioxidants

A study done comparing the antioxidant activity of 26 spices concluded cinnamon as the winner even outdoing "superfoods" like oregano and garlic.

Cinnamon Has a Powerful Anti-Diabetic Effect

Half a teaspoon of cinnamon taken daily has been shown to have beneficial effects on blood markers. Insulin is one of the primary hormones that regulate energy use and metabolism, but many people experience insulin resistance resulting in a variety of serious conditions like type 2 diabetes or metabolic syndrome. Cinnamon has the ability to reduce insulin resistance, permitting this critical hormone to do its job.

Diabetes is becoming more common but baking with cinnamon can help to keep your blood sugar levels in check. A 2007 study in The American Journal of Clinical Nutrition found that when healthy subjects consumed cinnamon with a meal, their blood sugar levels were lower after the meal compared to when they consumed a meal without cinnamon.

Some studies have suggested that cinnamon can promote heart health by lowering levels of bad cholesterol. In 2012, scientists for Pharmacognosy Research found that the administration of a cinnamon extract lowered artery-clogging LDL cholesterol levels and total cholesterol in both healthy and diabetic rats.

One of the main active components of cinnamon, Cinnamaldehyde, may help fight various types of infection including respiratory tract infections caused by fungi. It may also slow/stop the growth of some bacteria including Salmonella and Listeria. Additionally, prevention of tooth decay and the reduction of bad breath are the result of the antimicrobial effects of cinnamon.

With animal studies showing that cinnamon has a cholesterol-lowing effect, this spice might just protect you from heart disease and lower your blood sugar. Use it generously in your holiday cooking and baking to whip up dishes that your friends and family will appreciate. Cinnamon can be used in a variety of recipes, including baked oatmeal, soups, cottage cheese, applesauce, baked apples muffins, pancakes, cookies, coffee cakes, and sweet potato dishes.