What is the HCG Diet? 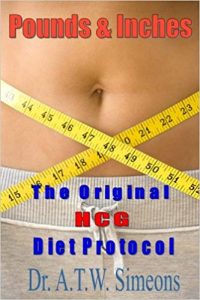 HCG (Human Chorionic Gonadotrophin) is a hormone naturally produced in large quantities during pregnancy. Dr. A.T.W. Simeons, the developer of the HCG Diet Protocol, previously worked on the problem of obesity for 40 years and specifically on the HCG Diet Protocol for over 20 years. He received prestigious commendations for his work, wrote several medical books, and contributed to many scientific publications. His most well-known work is his manuscript, Pounds and Inches: A New Approach to Obesity. He found that small, regular doses of HCG caused the body to release abnormal fat when used in conjunction with a specific 500 calorie daily diet. For a full description of what HCG is and why HCG makes weight loss and maintenance possible, you should educate yourself by reading his full manuscript. This restricted diet is only comfortable and advisable when a person is taking HCG. Don’t let the 500 calories per day scare you as most participants are not hungry and have plenty of energy.

During the time Simeons was working in poor, underdeveloped countries, he observed that pregnant mothers who had barely anything to eat still produced healthy babies without their own health deteriorating. HCG directs the body to tap into its stored fat deposits as a source of calories rather than depending on calories from food intake.

Dr. Simeons found the HCG Diet Protocol to be an extremely safe and effective form of weight loss. He said “It is well known that during pregnancy an obese woman can very easily lose weight. She can drastically reduce her diet without feeling hunger or discomfort and lose weight without, in any way, harming the child in her womb. It is also surprising to what extent a woman can suffer from pregnancy-vomiting without coming to any real harm. It is only during pregnancy that fixed fat deposits can be… freely drawn upon to make up for any nutritional deficit. During pregnancy, every ounce of reserve fat is placed at the disposal of the growing fetus… There is considerable evidence to suggest that it is the HCG produced in large quantities in the placenta which brings about this diencephalic change.” The key to initiate the draw upon fat deposits for energy with HCG is “severe dietary restriction”. Dr. Simeons stated, “In pregnancy the needs of the growing embryo take care of this to some extent, but in the treatment of obesity, there is no embryo, and so a very severe dietary restriction must take its place for the duration of treatment. Only when the fat which is in transit under the effect of HCG is actually consumed can more fat be withdrawn from the fixed deposits. In pregnancy it would be most undesirable if the fetus were offered ample food only when there is a high influx from the intestinal tract. Ideal nutritional conditions for the fetus can only be achieved when the mother’s blood is continually saturated with food, regardless of whether she eats or not, as otherwise a period of starvation might hamper the steady growth of the embryo. It seems that HCG brings about this continual saturation of the blood, which is the reason obese patients under treatment with HCG never feel hungry in spite of their drastically reduced food intake.”

We have had thousands of clients use the HCG Diet Protocol with great weight loss success and significant improvement in overall health.