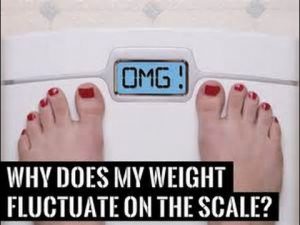 The way your body works is extremely complex. This is a simple explanation of why, on some days you do not lose, even if you have not cheated. Fat is being extracted from the cells in which it is stored in fatty tissue. When these cells are empty, the body breaks down the cellular structure and absorbs it, but breaking up of useless cells, connective tissue, blood vessels, etc., may lag behind the process of fat-extraction. When this happens, the body appears to replace some of the extracted fat with water that’s retained for this very purpose. Since water is heavier than fat, the scale may show no loss of weight, although sufficient fat has been consumed to make up for the deficit in the 500-calorie diet. When the tissue is finally broken down, the water is liberated and there is a sudden flood of urine and a marked loss of weight.

Fluctuations in Weight Loss Due to a Dietary Error

If you cheat, you will gain weight. Remember that under the influence of hcg, the blood is saturated with food and the blood volume has adapted itself so that it can only just accommodate the 500 calories which come in from the intestinal tract during the day. Any additional income of calories, however little this may be, cannot be accommodated and the blood is forced to increase its volume sufficiently to hold the extra food, which it can only do in a very diluted form. Thus, it is not the weight of what is eaten that plays the determining role but rather the amount of water which the body must retain to accommodate this food.

Keep in mind that this only happens as long as hcg is in the system. Once the hcg has exited the body, the blood is no longer saturated and can accommodate extra food without having to increase its volume.

Fluctuations in Weight Loss Due to Reaching a Formal Level

Another type of interruption in weight loss is when a participant reaches a former level of weight, a “weight set point”. It is normally seen in those who, during some period of their lives, have maintained a certain fixed degree of weight for ten years or more and have then, at some time, rapidly increased beyond that weight. This interruption in the regular loss of weight may last much longer—ten days to two weeks. This is uncommon and doesn’t normally occur during the first round. When during the round, this former weight level is reached, it may take two weeks of no loss, even if the diet is followed perfectly, for the body to break through this old weight set point and resume losing weight.

Fluctuations in Weight Loss Due to Menstrual Interruption

A menstrual interruption may occur a few days before, during the menstrual period, and, for some women, during ovulation. This isn’t much of a surprise since many women retain water during these times when they aren’t on the protocol.

If you encounter any of the above interruptions, be aware so that you don’t get discouraged and give up. Simply do what you’re supposed to do… follow the protocol!