Stretches to Help With Carpal Tunnel: A Musical Playlist 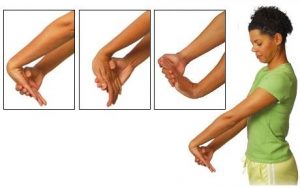 It starts with a faint tingling in the hand. Within weeks, it progresses to pain and numbness throughout the arm and wrist. Carpal Tunnel affects about five percent of the American population, and its diagnosis is on the rise, becoming more common every day.

Carpal tunnel syndrome is caused by repetitive movements that affect the median nerve, a nerve that runs from the forearm through the wrist that's protected by the carpal tunnel, a tough passageway of ligament and bone. Thickening of the ligaments puts undue pressure on the nerve, thereby making movement and gripping more difficult. As the condition becomes more severe, simple life tasks, such as buttoning a shirt, become difficult.

Although the most severe cases require surgery to relieve the compression on the median nerve, there are many stretches that can provide relief or even cure carpal tunnel. All it takes is a few minutes at your desk daily to get that swelling down. Today, we have compiled a helpful musical playlist so you can easily remember these simple exercises.

Your first bodily instinct when experiencing carpal tunnel syndrome will be to shake out your hands. This is good, as the shaking motion can bring blood flow to the affected areas as well as that median nerve. In the earliest stages, this may be enough to stop the tingling. This increase of blood flow is so important for stretching that it's recommended that you shake your hands out between each of the following stretches.

"Stop In The Name of Love"

For the first stretch, hold up both arms straight in front of your shoulders, and make the "stop" gesture with your hands. Hold for ten seconds, then allow your wrists to go limp, or gently shake them out — whatever feels best to you. Repeat several times.

Next, keep those arms out while you stretch both hands down, as if you were receiving a kiss on the hand. Another ten seconds of stretching, ten of release, then move on to the next movement.

Still with arms outstretched before you, angle your fingertips outward from your center as if you're turning them into a shadow puppet of a bird. Hold for ten seconds, and release for ten.

The next step is the inverse of the last movement. Instead of pointing your fingertips outward, point your fingers toward one another. Hold for ten seconds, release for ten.

For the final stretch, hold your arms out with hands flat as if you're auditioning for a part in The Walking Dead. Hold for ten, and finish off with a good shake to get that blood flowing through your fingers and wrists.

Surgery is costly and requires downtime most people can't afford. Wrist splints limit movement and can be cumbersome. Stopping your day for a few minutes at a time to do these stretches can prevent both of these scenarios and even cure CTS when it's in the early stages. Just go through this list for two to three sets, twice a day to reduce tingling and ease pain.