Ways to Reduce the Symptoms of PMS 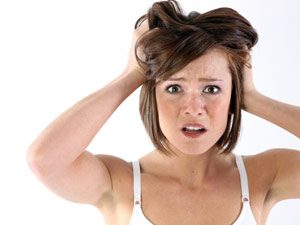 An estimated 75 percent of women have experienced one or more symptoms of pre-menstrual syndrome, or PMS. (If you haven’t, I’m jealous and we can’t be friends.) While its cause is largely unknown, there are a number of factors that contribute to PMS, whose symptoms typically appear sometime during the two weeks before menstruation begins and disappear within four days prior to the start of the period.

Hormonal changes in the body appear to have a major role in some symptoms of PMS, and during pregnancy and menopause, PMS symptoms disappear completely (sure, only to be replaced by the lovely symptoms of pregnancy). Chemical changes in the brain, particularly a lower production of the neurotransmitter, serotonin, are thought to be responsible for the mood swings, fatigue, sleep problems and food cravings that often affect women in the days before their menstrual period starts. Undiagnosed or untreated depression often results in more severe PMS symptoms relating to emotional states, but depression isn't considered a cause of PMS.

The Physical & Emotional Symptoms of PMS

Most women experience only a few of the long list of PMS symptoms each month, which may range in intensity from very mild to very severe. But symptoms of PMS tend to follow a predictable pattern, so you're likely to experience the same set of symptoms in roughly the same intensity every month. So, technically, you can give those you love around you a heads up in advance to take shelter until the white flag is flown.

Some of the physical symptoms of PMS include joint or muscle pain, headaches, tenderness in the breasts, abdominal bloating, cramps, constipation, diarrhea, and acne flare-ups. Some of the emotional symptoms of PMS include anxiety or feelings of depression, changes in appetite such as irresistible food cravings, mood swings such as crying spells, irritability, anger, insomnia, social withdrawal, and trouble concentrating.

If only we could transfer this to men for a day. They would have a bag of chips, a box of tissues, and a punching bag at our doorway in preparation of “that time” if they knew what we had to go through!

Whether you experience severe cramps, an unbearably low mood, or bloating that makes your clothes feel a size too small, there are medications, both prescription and over-the-counter, that can help.

Lifestyle Changes Can Help Too

You can make a number of lifestyle changes to keep symptoms under control in the two weeks prior to your period. *Warning, many of these are in complete contrast to what you actually feel like doing during this time:

Keeping track of your symptoms for three or four months can help you identify triggers that tend to make symptoms worse. Your findings can help you make additional lifestyle changes to ease the severity of some symptoms. If your symptoms are particularly severe or interfere with essential daily activities, visit your doctor to determine the best treatment options for you. In other words, find a way to control your inner green diva monster out of respect for those around you.