Top 4 Benefits of Being An Early Riser 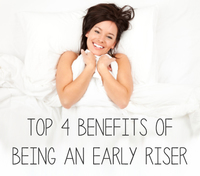 It's the same every morning. Your alarm goes off at 6:30, and you hit the snooze button. Fifteen minutes later, you hit it again, and then again, and again, and again, and at 7:45, you leap out of bed like a bat out of hell with just 30 minutes to go before you have to walk out the door to avoid being late for work. Again.

Getting up early can be tough, especially if you're in the habit of staying up until the birds start stirring, but it gets easier the more you do it. And even though you won't usually spring out of bed at 6:30 a.m. lookin' good and raring to go, that extra hour or more in the morning can make a world of difference for your health, your motivation, and your quality of life. Here's why.

Tips for Becoming an Early Bird

Shedding your night owl habits and becoming an early bird isn't as impossible as it sounds from where you're sitting, having gone to bed in the wee hours of the morning. But if you make the transition gradually by waking up 15 minutes earlier each week, you'll soon be bounding out of bed with enough time to have a cup of coffee, eat breakfast, read the paper, and sneak in some yoga, all before you need to start thinking about hopping in the shower.

From day one, keep your alarm clock across the room so that you have to get out of bed to shut it off. Resist the temptation to crawl back under the covers for just one snooze cycle. Instead, exit the bedroom immediately. By the time you get to the kitchen and start a pot of coffee, you'll already be feeling more awake and energized, and soon you'll ready to attack your day with a vengeance instead of being beaten up by it first thing in the morning. Or afternoon, as the case may be.

What time do you usually get up?