Is Diet Soda Bad For You?

Do artificial sweeteners really provide the miraculous "taste of sugar" without any calories, or could dangerous secrets be hiding in that sweet taste? Zero calories seem like a good thing and an integral part of an effective weight-loss program. A 12-ounce can of regular soda has about 150 calories, compared to diet soda with zero calories. Most people think, “duh”, easy decision.

Some health organizations, including the American Heart Association (AHA) and the American Diabetes Association (ADA), have given cautious approval to a minimal use of aspartame. Some recent studies, however, have brought to light some serious concerns about the safety of aspartame and it may well change the way we think.

In Texas, researchers conducted the San Antonio Heart Study with the goal of determining if artificial sweeteners interfered with the brain's association of caloric intake to sweetness. The results of the study indicate the artificial sweeteners may trick the mind and, as a result, users eat a greater amount of sweets and gain weight. Those participants consuming "more than 21 diet drinks per week were twice as likely to become overweight or obese than those who didn't drink diet soda." (Do you mean to tell me the very thing I am ingesting to avoid gaining weight is actually making me . . . . . . gain weight?!)

There are other major concerns over the consumption of diet soda since the results of the Multi-ethnic Study of Atherosclerosis were made known. The study determined "daily consumption of diet drinks was associated with a 36% greater risk for metabolic syndrome and a 67% increased risk for type 2 diabetes." Other recent studies suggest weight gain is not the only health issue connected to diet soda. Strokes, kidney failure, and some types of cancer are now being associated with the use of diet soda. (Does anyone else think this is starting to sound like a side effects run-down at the end of a prescription drug commercial?)

The American Journal of Clinical Nutrition has also released a study focused on men, and that study states that "men who drink more than one aspartame sweetened soft drink per day can increase their chances of developing several blood cancers."

A study conducted at the University of Minnesota, using 10,000 adults, resulted in findings showing a single diet soda per day was "linked to a 34% higher risk of metabolic syndrome, a group of symptoms including belly fat and high cholesterol that put you at risk for heart disease."

In spite of all the recent research evidence linking the consumption of diet drinks with several diseases, the FDA continues to say it is safe. Perhaps "safe" needs to be challenged. What do you feel is safe for your body? With so much evidence pointing to aspartame as a dangerous chemical, should you choose to ingest it in a diet drink?

The decision is yours, but maybe it's time to consider drinking some good old-fashioned, zero-calorie water! If you want a little flavor, give all-natural stevia a try. Stevia has been in use for decades in the U.S. and for hundreds of years in South America. Stevia comes in 15 flavors in the liquid form, some better for coffee and some better for water. Add a few drops and prepare to be amazed! 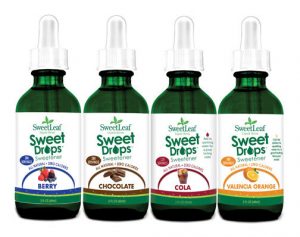