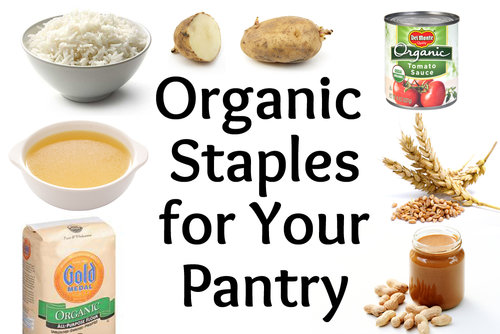 You don't have to wear patchouli and eat granola to subscribe to the widely-held and research-backed belief that organically grown food is better for you than that which is heavily doused in the 600-plus chemical pesticides used in fields and gardens across the U.S. to the tune of 16 pounds per person every year.

According to the Environmental Protection Agency, chemical pesticides affect the nervous system and negatively impact the body's hormone and endocrine systems. Pesticide consumption has been linked to learning and attention problems and various cancers in children and reproductive problems — among other ailments — in adults.

Genetically modified organisms, or GMOs, may have even more devastating health effects, and preliminary research into GMOs is fraught with bad news, which is why at least 26 countries — including Australia, India, France, Germany, Italy, Mexico, and Russia — have completely banned GMOs. Unfortunately for us, the U.S. government has absolutely no interest in so much as passing laws that require GMO foods to be labeled as such so that consumers know what they're eating. (Thanks, Monsanto!)

Besides the obvious health benefits of going organic with some of the dirtier staples in your diet, organically grown and raised produce and meat are better for the environment and the critters that call it home.

All foods labeled "100% Organic" are guaranteed to be non-GMOs. Organic meat is raised without the growth hormones that are widely and heavily used in the U.S. and which have been directly linked to cancer, particularly in women. These hormones have been categorically banned in Europe, where scientists agree that there is no safe level for their consumption by humans.

Are you concerned but afraid eating organic will make you broke?

Then keep a list of The Dirty Dozen (the twelve fruits and vegetables that you should always buy organic) on your fridge, and only buy the organically grown versions. Then, clean out your pantry and replace your pesticide-saturated staples with their organic counterparts, including these seven widely-used ingredients.

Tomato sauce: Organically grown tomatoes have 55 percent more vitamin C than those that are conventionally grown, and they have none of the 35 different pesticide residues found by the FDA on conventionally-grown tomatoes and the tomato sauces, ketchups, and salsas made from them. The most common pesticide used for growing tomatoes is 2-chloroethyl linoleate, and it's been linked to liver and nerve damage.

Potatoes: According to the USDA, around 80 percent of potatoes — even those that have washed and peeled — contain pesticides. Of those identified, six are probable or known carcinogens, 12 are potential hormone disruptors, six are reproductive toxins, and seven are neurotoxins. The most common is chloropropham, which is highly toxic to our disappearing honeybee population and causes kidney, liver, and spleen enlargement and death in lab animals.

Peanut butter: Conventional peanut butter is made from peanuts that are heavily treated with pesticides and fungicides that, due to the high fat content of peanuts, permeates the shell and contaminates the peanut inside, and thus contaminates your peanut butter.

Rice: More than 40 different pesticides have been found on California-grown rice, including various known carcinogens, bee toxins, neurotoxins, and hormone disruptors. Conventionally grown rice is heavily soaked in pesticides and fungicides from seed to harvest, and in 2012, Consumer Reports published a study citing "worrisome" levels of inorganic — and highly toxic — arsenic in rice products. Consuming inorganic arsenic increases the risk of various cancers, including those of the lung, skin, liver, and prostate.

Broth: Chicken, beef, and vegetable broth are staples in a whole mess of dishes, but when these broths are made from hormone- and antibiotic-injected animals and pesticide-laden vegetables, they're anything but wholesome. Organic broth is a must if you use it for all of your soups, stews, and sautees.

Cereal: Wheat-based cereal is rife with fumigants, and almost all conventional breakfast cereals contain GMOs, including the sugar, corn syrup, and canola oil and the grains themselves. From oats and corn to barley and millet, pesticides and fungicides found in cereal grains give you anything but a healthy start to your day.

Flour: Especially if you're Betty Crocker in the kitchen, using certified organic flour is the only way to avoid consuming large amounts of pesticides and fumigants in your wholesome cakes and cookies, and it's the only way to ensure the grains aren't GMOs.

What’s your favorite organic staple to keep in your house?