Benefits of Writing Down Your Goals 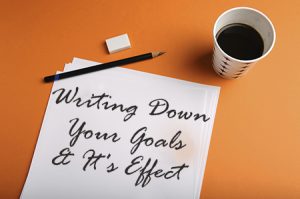 Turns out, committing your goals to paper has a number of benefits over letting your hopes and dreams lallygag around in your head like lazy teenagers on summer vacation. Because guess what? Time flies, and before you know it, you'll be old and tired. You'll look around at your cats and your doilies, and you'll shake your fist at the sky and shout, "I had goals! I did! But I don't remember them! Because I didn't write them down! And now here I am, and all I have to show for the past 60 years is this little house full of self-entitled cats and stinking doilies!"

Writing down your goals forces you to clarify exactly what those goals are. Sure, one of your goals might be to make a million bucks, but writing that down on a piece of paper just begs for bullet points underneath, roughly describing how you intend to get there, and when.

Writing down your goals stops the marbles from rolling around, banging into each other in chaos and confusion, and rolling away, forgotten and unfulfilled. Putting your marbles in a cage where you can see them — all of them — is the best way to keep track of them and to make them so.

Writing down your goals frees up your mind to begin actually working on them. If you're always trying to wrangle your goals and chase 'em around your head like a Quiverfull of kittens, you're probably too busy trying to remember them and keep them straight to actually achieve them.

Are you convinced? Then grab a piece of paper and start writing!

What kind of life do you want to create for yourself? Do you want to be happy? Filthy rich? A great dancer? A best-selling novelist? Learn to play the trumpet? Put it all down in bullet points, your dearest-held visions of fame, fortune, and fulfillment.

For each bullet point, create a list of goals. If one of your goals is to buy a house on the beach and write novels for a living, you've got to start where you are. What steps do you need to take to reach each of your goals? How long might that take? How might you speed it along? Once you start writing, you'll start asking questions you wouldn't otherwise know you needed to ask, and you'll start answering questions you didn't know you had. You'll have a concrete blueprint to work from. Make your goals — and the steps you need to take to reach them — achievable and measurable. Write down a realistic time frame for each step. Write down the barriers that might prevent you from reaching your goals in your ideal time frame, and make notes of some steps you can take to head off or overcome those barriers.

Set a Series of Benchmarks

Benchmarks for your goals are like rest areas along the Interstate. Each rest area allows you the opportunity to reflect on where you've been and how far you've gotten, and it gives you a chance to revise your travel plans as needed in order to make it to your destination on time or to decide on a scenic detour that will further enhance the journey. Where should you be a year from now? Where should you be three years from now? Five years from now? Remember, your written goals and related benchmarks aren't carved in stone. They may change with time. You may meet them sooner than expected, or you may find that they may take far longer than you expected. But for now, from where you sit, create a tentative road map to your ultimate destination.

Your goals are now on paper, along with a rough plan for achieving them. Put your plan where it'll fall into your field of vision every now and then. Commit yourself to doing one small thing each day that will bring you closer to your goals, whether that's putting five bucks into savings instead of buying that bauble you really don't need or reaching out to connect with someone whose help or expertise might be instrumental in helping you make it to that first benchmark.

While writing down your goals can help you stay focused on them, don't get so caught up in reaching them that you don't enjoy the process of doing so. Life is about enjoying and learning from the experiences in each moment that passes, and it's about walking through open doors, even if those doors may take you on a side trip and extend the time it takes to achieve your goals. And even as you work toward your goals, stay open to other possibilities. Things change, people change, times change. Goals change. Roll with those changes, and have fun along the way.

What’s one of your top goals in the next 5 years?